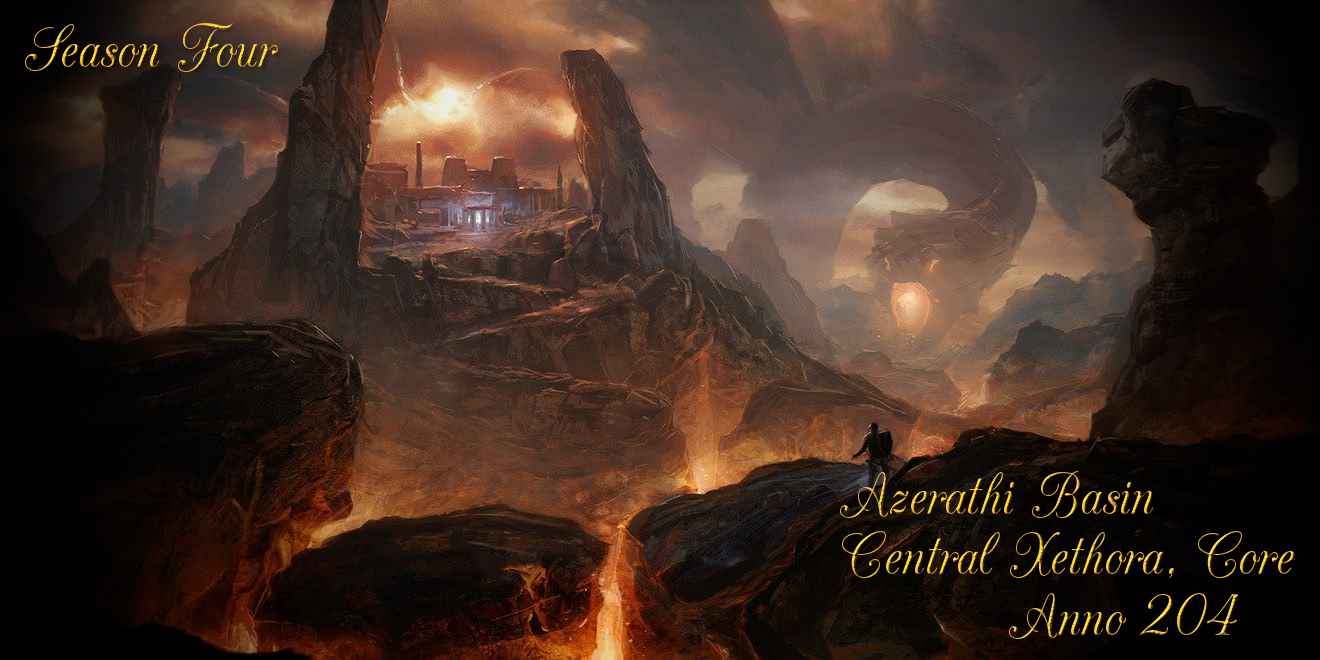 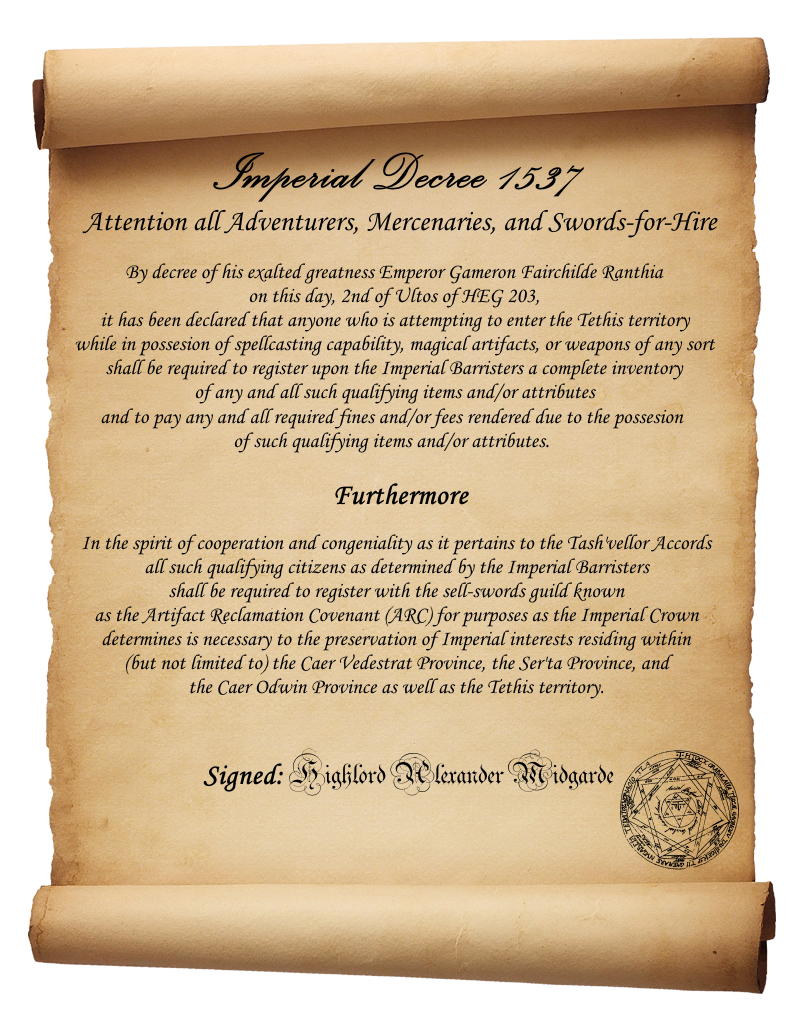 Greetings and salutations! This game is going to be an introduction to D&D 3.5 for several of the players so I think it will be interesting to see how things develop.

Welcome to the wondrous world of Alcarna. It is the year 203, marking the bicentennial anniversary of the end of the great war between the human kingdom of Ranthia and the elven republic of Tash’vellor.

Far to the north lying within the long shadow of the Vedestrat Mountains, the solemn village of Greenfield serves as the northern most Ranthian settlement along the unexplored northern borderlands. Greenfield has long and somewhat bloody history of conflict with the goblins and orcs, resulting in at least two recorded instances of the town being razed to the ground. While this was all long in the past the hunters and farmers of Greenfield have reported an unusually high number of sightings over the last season and several animals have gone missing in the dead of night.

The many Ash Vents that are scattered throughout the landscape have reportedly been producing more of the fertile ash as well, greatly boosting agricultural production but leading street corner doomsayers to claim that the end is nigh, a claim which any true clergyman will refute. Still, the populace has begun to grow uneasy as the rumors take hold and certain nasty sects gain more influence.

03/06/2020
Added the map for Kettlemurk Citadel, home of the resistance and frequent stopover for our heroes! 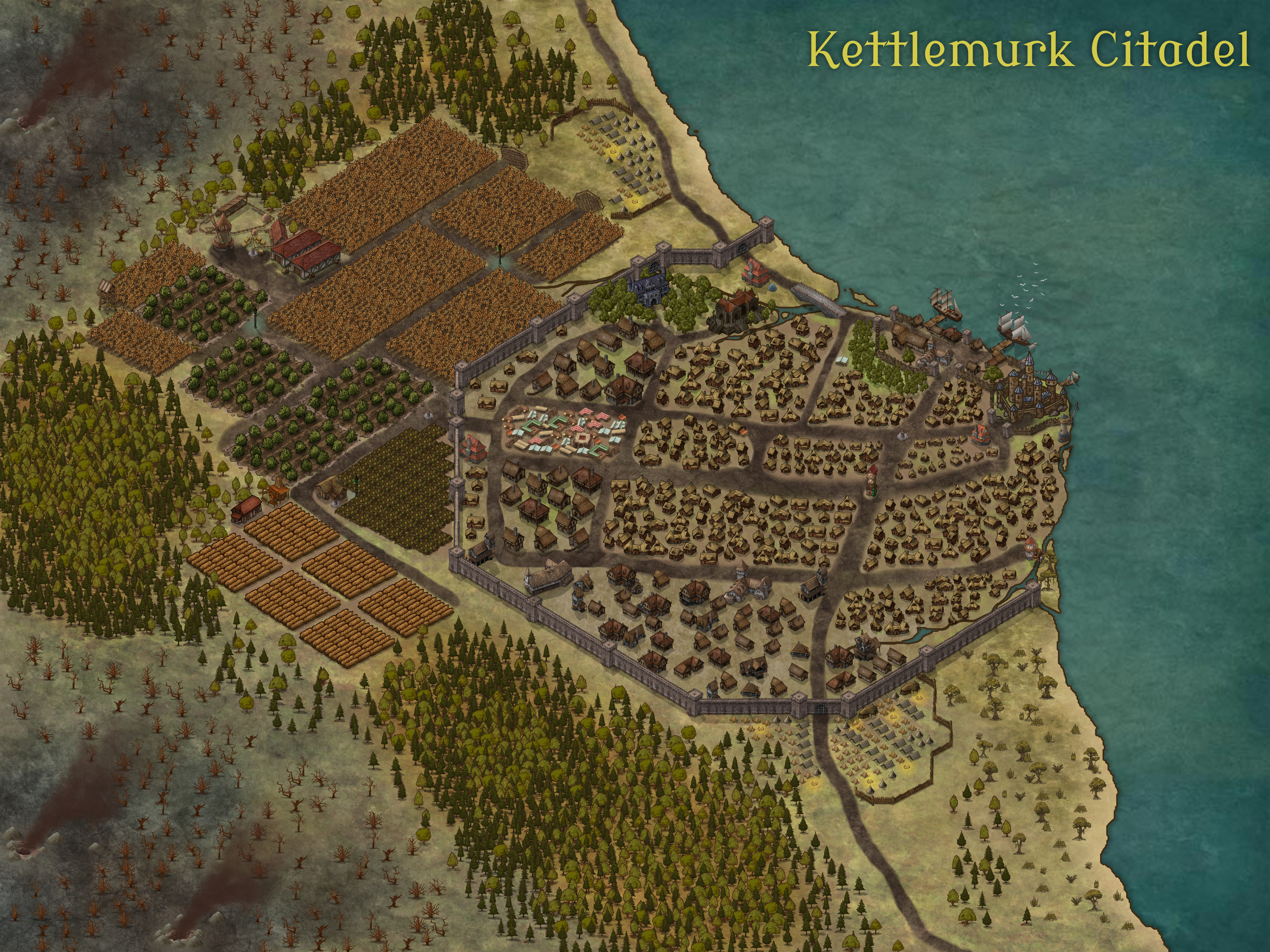 02/26/2020
Our Heroes (level 19 now!) have returned to Tethis to consult with their patron Highlord Alexander Midgarde. Planning is underway to provide mutual relief efforts (covertly) to the citizens of both Tash’Vellor and Ranthia, though the current Ranthian ruling body isn’t willing to assist the elven nation. As a result of Highlord Council’s unwillingness to cooperate there is an undeniable undercurrent of rebellion simmering in the Ser’ta Province. With the Ranthian empire teetering on the verge of civil war our Heroes are forced to work in the shadows or be publicly implicated, leading them to strike a deal with the vampire crime syndicate The Night Court. As a favor to them our Heroes agreed to examine a few vampires that have been infected (infested?) with the metallic filaments from the Ash Vents. Down in the vaults what our Heroes found were no longer vampires but a sentient cloud of filaments that could reform itself at will, was capable of moving lightning fast, and which had a rather nasty meanstreak. In deadly combat our Heroes prevailed over the creature, preventing it from successfully escaping from the vaults.

At least, they’re reasonably sure they succeeded…

01/10/20
Season Three has been completed and our ardent companions have broken the second seal that holds the evil of the Builders at bay, discovering the origins of Alcarna in the process. Everything that they’ve ever loved, everyone that they grew up with, and everywhere that they’ve ever lived have all been located on the shellworld of Alcarna, a massive deific mechanical sphere which was constructed through the combined efforts of Heironeus, Nerull, and Proteus to seal away the danger of the Builders for all eternity. Two of the three gods now lie in the custody of the pantheon for violations of their divine non-interference agreement, leaving only Proteus behind to assist our companions in their heroic efforts to stop the final seal from being broken while finding a way to eliminate the threat of the Builders forever. Will our companions be able to stop the remnants of the Builders and their creations from breaking the seal? What of the ash vents that continue to spout metallic poison into the air? What of the Builder tech obsessed Highlords of Ranthia and the simmering rebellion brewing in their territories?

11/15/2018
Season Two has been completed and our stalwart comrades are headed up the Gnomish Coast to find Direpeak, the lost Clanhold of the Deathspeaker Clan. There they hope to find the anwers to the problems that plague them, such as the increasingly dangerous attacks from The Destroyer, what connection Mila Tassok and Baits have to The Builders, and what exactly the Proteus Apparatus is supposed to be used for. Meanwhile, danger grows in the north as rumors of insanity running rampant through the nobility of Nethlek Citadel reaches our adventures. Even worse our friends will likely find themselves attempting to locate Direpeak as the winter of northern Ranthia hits making travel dangerous even for the immensely experienced and prepared. What dangers will they face next?

10/03/2017
Season One has been completed and our brave adventurers have departed from the village of Greenfield. The vampire menace has been dealt with, the orc, goblin, and kobold threats have been nullified, and Kazmo is nowhere to be found. They are now bound for Tethis, the Ranthian capital, where more excitement awaits!

Our dauntless adventurers have decided to take on the goblin and orc threat in the forest to the southwest of Greenfield as a good followup to surviving their first major boss encounter by slaying the nefarious Mister Cuddles!

Congratulations to everyone and I just wanted to say that it only gets worse from here. I hope you are looking forward to it because I know that I am, as is Kazmo the Insufferable.

We do, yes. It’s silly, which is a fun thing to have sort of breaking tension in the background when everything in the campaign world trends towards hopelessness.

Congratulations to you and your team for the CotM win. Great interview! I loved being reminded of the “Squid Head” house rule. I was wondering….do you still keep doing that????

I feel sad for Mr Cuddles!

I'm sorry, but we no longer support this web browser. Please upgrade your browser or install Chrome or Firefox to enjoy the full functionality of this site.